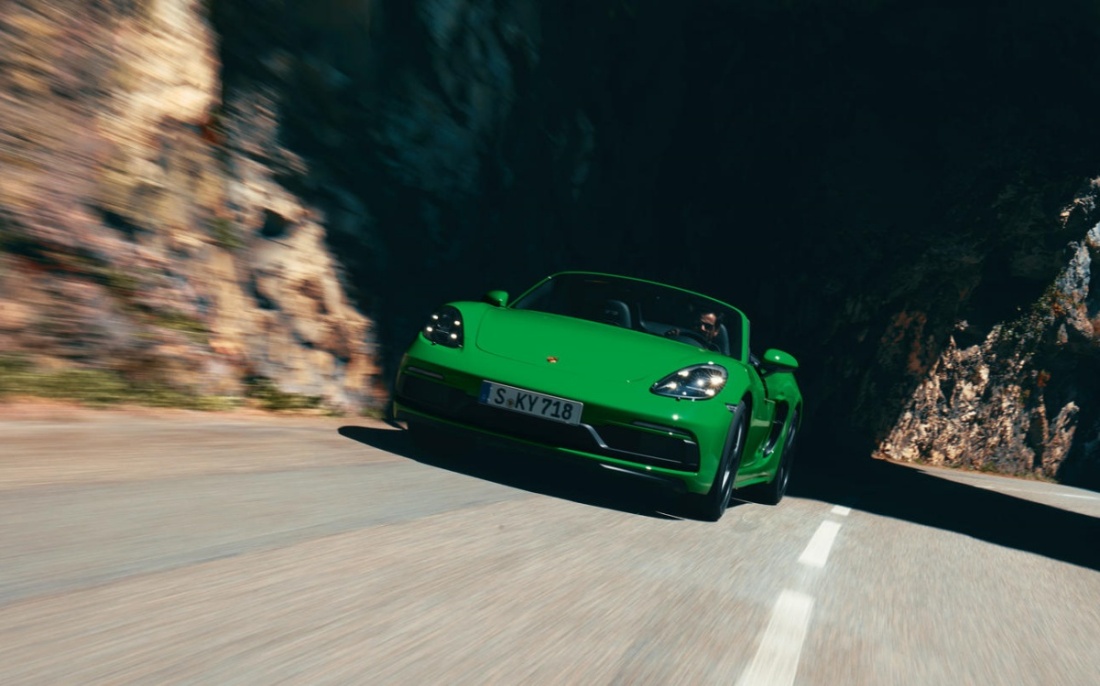 The Porsche 718 Boxster has been one of the German company’s best-selling models. Its positioning as an entry-level model coupled with its two-seat roadster body style has found many takers. It continues to pay homage to the 550 Spyder, the last mid-engine roadster from Porsche. It amazes me to see how this car gets overshadowed by even the Cayennes and Macans. Now I will try to do my best to give the Boxster its due. After all, it has just given a proverbial shot in the arm. Presenting the Porsche 718 Boxster GTS 4.0.

The Porsche 718 Boxster GTS 4.0 is the latest addition to the current-gen 718 family of mid-engine two-seat car lineup. The Cayman is the hardtop sibling to the Boxster (more on that some other time). The biggest change on the 718 Boxster GTS is its engine as the car is essentially the fourth-gen model underneath (codename 982). Coming to its engine, the car gets rid of its turbocharged flat-four engine in favour of a naturally-aspirated flat-six engine.

The flat-six engine on the new Boxster GTS is the same as was seen on the 718 Cayman GT4 and 718 Spyder. Displacing 4.0 litres, it features tricks like direct injection, and variable intake system to help the engine rev up to 7,800 rpm. On the efficiency front, it features cylinder deactivation. To meet stricter emission norms, it features an integrated gasoline particulate filter.

Mated to a six-speed manual gearbox (hooray!) and a standard sports exhaust system, the Porsche 718 Boxster GTS 4.0 goes from 0-100kmph in just 4.5 seconds and keeps going until it reaches 293kmph or the road ends (whichever is earlier). That’s the power of a six-cylinder engine generating 400HP power and 420Nm torque for you. The car will still go 11km to a litre, in case you’re wondering about kitna deti hai (fuel economy worry is a thing).

The 718 Boxster GTS is based on the current-gen Boxster, which means it isn’t much different from the existing model on sale. That said, it features Porsche Active Suspension Management (PASM) sports suspension, 20mm lower ride height than standard car, Porsche Torque Vectoring (PTV) with a mechanical limited slip differential at the back, standard Sport Chrono package, active engine mounts, and updated Porsche Track Precision app.
Optionally, it can be fitted with Porsche Ceramic Composite Brakes.

Looks wise, the Boxster GTS 4.0 gets 20-inch wheels, and dark contrasting details to exterior bits like tail lights, front fog lights, spoiler lip, and the front apron. Inside, the car features dark Alcantara on centre panels of seats, steering wheel, centre console, gear lever, and door armrests. A seven-inch touchscreen infotainment unit is standard on the car and a Bose/Burmester surround sound system are available as options along with online navigation, voice control, and Porsche Connect.

Is the Porsche 718 Boxster 4.0 worth consideration?

Also do consider these facts – mid-engine rear-wheel drive, convertible soft top, space up front and back, only two seats, manual gearbox, Porsche badge on bonnet. Also consider that this Boxster combines one of Porsche’s best-sounding (and performing) engines with one of its most capable chassis and you have a combo that you know you can’t say no to.