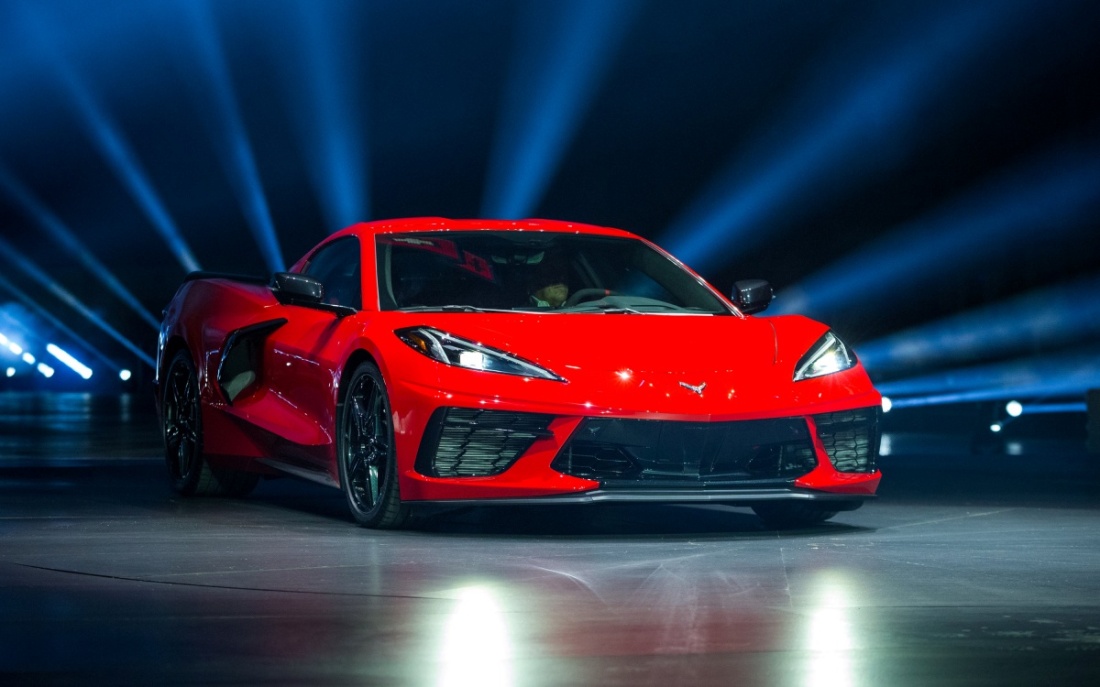 Making a sports car is a tough job. Everything has to be just right, from weight to the car’s looks. It even affects where the engine is going to be placed in the car. After all, the closer that bulk is to the centre of the car, the better the driving dynamics would be. This results from the centralization of mass that a mid-engine layout offers. Most sports cars also offer rear-wheel drive and having the engine right in the middle of the car helps educe transmission losses. The Chevrolet Corvette, until the C7 generation, used a front-mid engine layout with rear-wheel drive. For the C8 generation, it has now gone to rear-mid engine layout. You think it’s a small deal? If that’s so, you should definitely read about the Chevrolet Corvette (C8) Stingray here.

Now, the Chevrolet Corvette (C8) Stingray is a new car, yet it harks back to its predecessor. Both cars’ styling is so similar in philosophy that had it not been the mid-engine layout, the new car may have looked like the facelifted C7 ‘Vette.

However, the devil is in the details, as always. In this case, moving the engine behind the cabin means the car’s bonnet sits low and the frontal area has been reduced quite a bit. On the down side, luggage storage space has been reduced.

The repositioning of the engine has posed packaging problems for the new-gen Corvette. That’s why it has big air intakes on the sides. Also worth noting is the gentler sloping of the roof line due to the engine’s mid-rear positioning.

One thing the new Corvette shares with the old one is the trademark removable roof. More familiarity comes in the form of dual-element LED lamps at the rear which give the impression of quad taillamps, another Corvette trademark.

The Chevrolet Corvette (C8) Stingray’s engine is a sight to behold, sitting under that glass hatch. The car’s exterior design is minimalistic in nature, as highlighted by hidden door, bonnet, and rear hatch releases.

On to the cabin of the all-new Corvette, it has moved 16.5 inches forward in comparison to its predecessor, thanks to the relocated engine. It has been designed more like a fighter plane’s cockpit than a car’s cabin.

The interior’s driver focus is evident as soon as you lay eyes on it. The all-black interior is a great place to be in. Leather is spread as far as the eye can see, and the contrast stitching and metal inserts give a premium feel to the interior.

The driver is greeted by a 12-inch reconfigurable digital instrument cluster. It is laid behind a two-spoke racing steering wheel with flat top and bottom parts. It also gets a nice notch at 12 o’ clock, giving it a sporty feel. The infotainment screen has been tilted towards the driver too.

What I do think buyers will take issue with is the HVAC system layout. All lined up along the length of the centre stack, it may be difficult for some to operate this system.

The car has some nice features like one-touch Bluetooth connectivity with NFC, wireless charging, heated steering wheel, memory function for both seats, TPMS, performance data recorder, and a choice of either a standard Bose 10-speaker or an optional Bose 14-speaker Performance Series sound system.

Speaking about that performance data recorder, you can program it to record video feed (like dash cam) every time you start the car. You can also choose to turn it on when the car is Valet mode, you know, to keep those valets from taking your ride for a joyride. Before I talk about some practical features, let me also brush past the Chevrolet Corvette (C8) Stingray’s mechanical bits.

After all, it features some firsts here as far as Corvettes go. The C8 generation marks the first time a Corvette has been designed as a right-hand and a left-hand drive vehicle. Their availability will depend on the market in which Chevrolet retails the car. The car is made from lightweight materials all around, from carbon fibre to aluminium (or aluminum, if you’re so inclined).

Aluminium has been used in a way to ensure there are minimal joints in the car’s body for maximum stiffness. It has all been designed around the 6.2-litre small-block LT2 V8 motor that makes 495HP power and 637Nm torque with performance exhaust (more on that in a bit). In a Corvette-first, the car sports a Tremec-sourced 8-speed dual-clutch automatic gearbox only. The engine also features cylinder deactivation for fuel efficiency.

The gearbox on the new ‘Vette sports electric shifting feature. Eliminating a mechanical connection between the gearbox and shifting system, it uses two pull toggles for Reverse and Drive modes. For Park, Neutral, and Low/Manual modes, it features buttons.

Apart from Weather, Tour, Sport, and Track modes, there is a new user-configurable MyMode and a Z Mode that takes MyMode up a notch. The Z Mode is a single-use mode that allows you to alter engine and gearbox behaviour as well and can be activated via the Z button on the steering wheel.

Chevrolet has improved the steering ratio on the C8 Corvette to 15.7:1 for better control. The new eBoost brakes are claimed to be more tunable and precise than before. The 2020 Corvette Stingray gets Michelin’s all-season performance tires with near 1G cornering capability, the first application on any sports car.

Since the car sits quite close to the ground, it gets front lift system that raises its height up to 40mm in 2.8 seconds. Best bit about it is that it can be operated at up to 24mph speed and work automatically through GPS to remember up to 1,000 locations.

The Chevrolet Corvette (C8) Stingray features a launch control mode. In addition, it also gets a gearbox de-clutch feature activated by holding both shift paddles together. Time to bring the performance exhaust into conversation again. You see, it is not a standard offering and is a part of Z51 Performance Package.

A front splitter and a split rear wing help add 400 pounds of downforce. The available Performance Traction Management and MagneRide 4.0 damping system will surely be appreciated by enthusiasts like you, my fellow reader.

Chevrolet has thrown in a bit of practicality in the car in interesting ways. Firstly, the seats can be moved rearward by an inch and offer two-inch recline as well. The removable roof can be stored in the storage space in the engine bay. The front storage compartment can fit an airline carry-on bag and a laptop bag. In total, the storage space on the Chevrolet Corvette (C8) Stingray totals 12.6 cubic feet or nearly 360 litres.

The seat belts that can be had in one of six available shades – Black, Blue, Natural, Torch Red, Yellow, and Orange. For contrast stitching, you can opt for either Yellow or Red. Standard black interior has Sky Cool Grey contrast stitching. Lastly, you can opt for one of the three seats. First up are GT1 with optional two-way lumbar and wing adjustment and features Mulan leather trim.

Is the Chevrolet Corvette (C8) Stingray worth consideration?

If you are still here, you’ve read all there is about the Chevrolet Corvette (C8) Stingray. In no way are you not impressed with what the company has done with the new ‘Vette. In light of all the details (plus the specs below), the real question is what’s not to consider?

Most importantly, it is about telling everyone that sports car can be exotic yet affordable. For all these facts, the C8-gen Corvette Stingray is a must-consider kinda car. Exotic yet affordable, sporty yet docile, purposeful yet luxurious. Few cars will make you feel you got your money’s worth and I suspect this is one of them. That’s the kind of first impression it’s had on me.