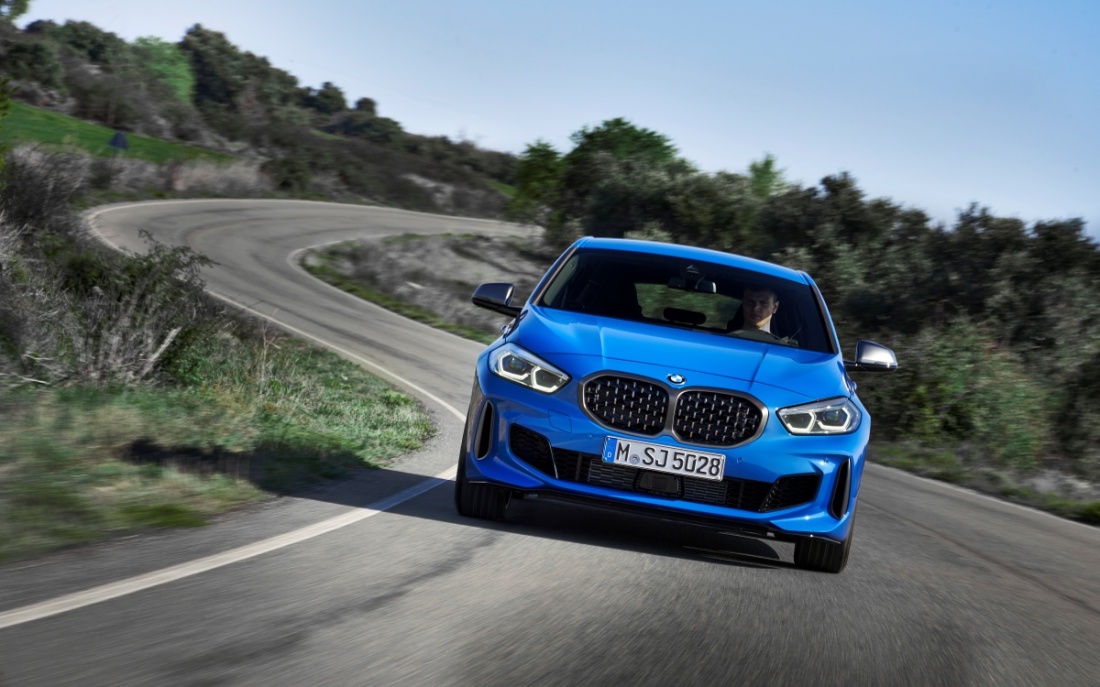 I love hatchbacks. I love them because they are highly practical. Want to navigate congested roads without stress? A hatch is the answer. Want boot space that can be doubled or tripled by tripping over a bench? Hatches are the answer. Want a funky looking vehicle that offers good fuel economy and can seat five in comfort? Go hatches. Due to this, when BMW revealed the new 1 Series, I couldn’t contain my excitement about its existence. Excitement aside, let’s see what new does the new BMW 1 Series bring to the table.

What’s new about the BMW 1 Series?

Right off the bat, I can see the Z4 influence in BMW 1 Series. Look at that kidney grille and tell me if it’s not similar to that on the Z4. Its rear end reminds me of the 3 Series and not in the nicest of ways. The new 3 Series, looks wise, shakes my faith somewhat in hatchbacks. BMW says they took five years to develop this model.

The old Mercedes A-Class and the Ford Focus RS existed then. Should’ve looked at them for inspiration eh, BMW? Even though looks are subjective, I don’t like the 1 Series in pictures at least. May be when I see one in person, I might change my opinion.

What isn’t clear by looks is what BMW did with the 1 Series under the sheetmetal. The company says the new model is 5mm shorter than its predecessor. That has resulted in shortening of the wheelbase by 20mm. Width-wise, the F40 BMW 1 Series has grown by 34mm and height-wise, it is taller by 13mm. I wonder how these changes impact the 1 Series’ driving dynamics.

The interior of the BMW 1 Series is a different story. While it could have been a lot better, the little Bimmer does have a clean interior layout. Mostly black with contrast stitching and brushed aluminium inserts, it feels nice.

Two screens dominate the interior, both measuring 10.25 inches. One is for infotainment, the other is for the driver. While it’s nice to see BMW Live Cockpit Professional on this hatchback, I will let you be the judge about its presence here.

What I do love is the presence of a 9.2-inch HUD on the BMW 1 Series. Though optional, I’d go for it instantly were I to buy this car. Anything that allows me to keep my eyes on the road is welcome addition for me. What I also like is a cool new feature is the Parking Assistant.

It stores up to 50 metres of steering data the car has driven forward on up to 36kmph. If you need to reverse now, the car can now reverse steer itself automatically at up to 9kmph. Semi auto parallel park feature with twist is what it is.

Another likeable feature is how the 1 Series uses a smartphone as its key. Using NFC, even if the phone is dead (per BMW), you can unlock your car. Placing the dead phone in the wireless charging tray or the smartphone tray will allow you to start the car.

This feature can be shared with up to five users and is available for all Samsung models with NFC and Android 8.0 Pie upwards. There is also the BMW Intelligent Personal Assistant to make your life easy by making the voice commands possible in the car.

You can option your little Bimmer with active cruise control (usable up to 160kmph) plus driver assistant suite with lane change warning, rear collision warning, and crossing traffic warning features. Active cruise control is available with automatic transmission that also have stop and go function.

The 1 Series will be available with three diesel engines and two petrol engines. Coupled with three different transmissions, you can have the little Bimmer in a total of 15 engine – gearbox combos. The 116d, 118d and 118i models can be had with a six-speed manual or a seven-speed dual-clutch automatic gearbox (only for 116d and 118i).

Importantly, the BMW 1 Series can be had with either front-wheel drive or all-wheel drive. Also, all cars barring the base model will get a multi-link rear suspension.

Outside of the range-topping model, the car can also be optioned with M Sport Steering and M Sport brakes. In short, there is a lot on offer with this car. The real question follows…

Is the BMW 1 Series worth consideration?

Let me talk about what’s likeable with the BMW 1 Series. First off, it’s a hatchback which is great. I think it is the second best looking new-gen car BMW has in its line-up, first being the new 8 Series. It offers good number of engine-gearbox combinations.

It comes with front-wheel drive, which is good in markets like India where front-wheel drive vehicles rule. Technologically, it gives no ground to the A-Class or any of its rivals, offering as much equipment as cars two segments above it. In terms of standard equipment, this car is packed.

Now for the bad part. The new BMW 1 Series doesn’t make a strong first impression. Compare it next to the new A-Class and you’ll know what I am talking about. Second, its novelty factor is gone now that it is no longer a rear-wheel drive vehicle.

In India, it was the only hatchback to offer that feature. Those who aren’t fans of BMW’s in-car tech and driver information solutions in the Z4 won’t like this either. That said, your tolerance level for BMW’s cabin quality and tech needs to be really low if you hate what the 1 Series offers.

No risk with interior, and exterior styling influences from its siblings is what the new BMW 1 Series looks like. I don’t think anyone will have a problem with its front end. It’s the rear end of this hatchback that I don’t think many will like.

BMW has not taken any such risk with the 1 Series. I mean think about it for once – what if the M135i had an inline-six from the Z4? Will we ever get a 1M xDrive, since the M1 name won’t suit this car? Ultimately, the new BMW 1 Series feels formulaic (at least on paper). Whether that’s its USP or the Achilles Heel is something I’ll let you decide.

BMW 1 Series – Specs at a Glance