Some say that for a car to be a success, it needs to have a few key ingredients in right quantities. One of those key ingredients is looks. That’s the reason why Audi is so popular among buyers. Each one of its cars looks like a million bucks next to its competitors, like the Audi A6. Or consider Hyundai and its various products like the Elite i20, the Verna, and the like. In their respective categories, Hyundai cars are one of, if not the best, lookers. But why am I talking about vehicle looks here? The vehicle I will be talking abut today comes from an automaker that can trade on the basis of its products’ looks alone. This automaker is Cadillac and its latest product, the CT6-V is a car that has both looks and the performance to back them up. In fact, I’d go so far as to say that GM should have started its India innings with a brand like Cadillac. Let me explain by discussing about the CT6-V.

What’s new about the Cadillac CT6-V?

The arrival of the Cadillac CT6-V signals the departure of ATS-V and CTS-V models. Those models were praised for their driving dynamics. However, a few decisions necessitated their departure, like using bits from GM’s parts bin or even Cadillac’s renewed sense of confidence in its own abilities to make sporty cars. The reason doesn’t matter as much as the fact that Cadillac wants to pave its own way and the CT6-V is a first step in that direction.

Another thing to note is that this car recently became a fully-fledged V model* (like the BMW M3 or the Mercedes-AMG C 63). Earlier, it was known as the CT6 V-Sport (like BMW M-Sport cars). Don’t mourn over the loss of the ATS-V and the CTS-V as two new products will take their place, so says Cadillac. Coming back to the CT6-V, this car is based on the 2019 CT6 sedan.

Design and looks are subjective topics. However, if you find one who says so in the company of the CT6-V, please stop talking to them outright. I am no design expert but even I know when a design is just too good. Take note of the fact that Cadillac has made no effort to make the CT6-V look curvaceous. It doesn’t have curves but slashes, cuts, and angles everywhere. But it all comes together well enough to make this car look a million bucks.

I especially love styling bits like the headlamps and taillamps, the LED light signature up front, and that chrome-outlined mesh grille with inset Cadillac logo. Let’s not also forget those front bumper-integrated turn indicators. All these bits come together to make this car look aggressive, sleek, neat, and unique. Trust me, it is not easy to make an onlooker feel all these attributes through photos only. 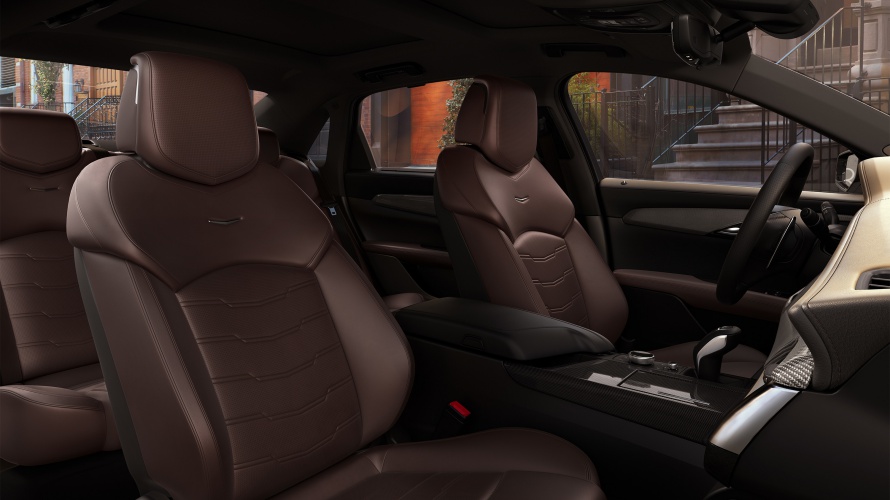 The inside of the car looks quite good too. Amid all the soft-touch surfaces and swathes of leather sits perhaps the worst feature of recent Cadillacs – the Cadillac User Interface infotainment system. However, here it sees an improvement as it can be operated via a rotary controller on centre console. Sitting near the CUE rotary controller is a volume knob. Only a hands-on will tell more about the general improvements in the CUE system. One thing is for sure though – Cadillac seems to have been listening to user feedback. If the results prove this fact, then Cadillac is poised for some good times ahead.

The Cadillac CT6-V may look great and have all the goodies too. However, its real talking point is an all-new engine. This engine is the biggest sign that Cadillac is serious about its new direction. This new engine is a DOHC, direct-injected, twin-turbo, 4.2-litre V8 Blackwing petrol motor. It makes 557HP (410KW) power and 850Nm torque. This engine seats its turbos between the Vee of the engine (in short, a hot-V configuration like the Mercedes-AMG GT).

The CT6-V sports a 10L90 Hydra-Matic 10-speed automatic gearbox that powers the all four wheels via a rear-biased AWD system. There is also rear-wheel steering on the car and the active exhaust system promises to offer more aural bliss with reduced backpressure. The car has a multi-link suspension setup at the front and a multi-link (5-link) setup at the rear.

The Cadillac CT6-V features Magnetic Ride Control dampers for optimum body control. The car has Brembo monobloc brakes with 4-pot calipers. The car measures 5,182mm in length, 1,879mm in width, 1,472mm in height, and its wheelbase spans 3,106mm. Do note that these are preliminary specifications and Cadillac may announce changes to them when it finally starts producing the car.

Is the Cadillac CT6-V worth consideration?

Do you believe in the idea of a sleeper car – a regular-looking supercar-shaming vehicle? If you like cars like the Nissan GT-R or the Mercedes-AMG C 63, then you do like sleeper cars. The Cadillac CT6-V is one such sleeper car. Unless somebody observes closely, they won’t be able to differentiate between a CT6 and CT6-V.

Cadillac is a brand with some nice-looking cars. Cadillac cars have been known to have good driving dynamics too, lending credence to the fact that Cadillac’s success is a given in most markets it operates in. This is the reason the company has reported year-on-year sales growth of over 25 per cent. This is the also the reason why India should be the market where Cadillac tries to continue its forward momentum. Best bet? Bring the CT6-V to India as a BMW M760Li rival and see the story unfold.

*Thanks Motor1 for that insight. Keep up the awesome work!