The Second Century plan of Aston Martin is off to a great start. This is one of the products under that plan. However, the company is yet to do away with all its older cars. The Rapide is one such vehicle. What did the company do in this case? Aston gave it the Aston Martin Racing treatment, turning it into the Aston Martin Rapide AMR. Its production is limited to just 210 units, and its prices start from $2,40,000 (approx Rs 1.64 crore at current exchange rate). Oh, there is one more thing – it will not be available for sale in either China or Russia. Would that reduce its chances of success?

The Aston Martin Rapide AMR looks as sharp as ever. Its design was inspired by the Henrik Fisker-designed DB9 and that gives it a sharp look even today. However, styling changes set the Rapide AMR apart from the regular car. Up front, there is a big mesh grille replacing the slatted unit on the regular car. The circular LED DRLs in the front bumper is a callback to Aston’s Zagato models. The front splitter is now made of carbon fibre. The bonnet (with large vents) is made of carbon fiber too.

On the side, the Aston Martin Rapide AMR has carbon fibre sills. The new 21-inch wheels round up the changes on either side. The rear has diffuser and boot lid spoiler (reminds one of the new Vantage) made of carbon fibre. The Rapide AMR will be available in three design schemes (per Aston) – Standard, Silhouette, and Signature. The Standard and Silhouette schemes are offered in four exterior colours – Marina Blue, Scintilla Silver, Lightning Silver, and Onyx Black. The difference between two schemes is addition of AMR Lime Green exterior accents (Standard scheme only) and a full-length contrasting stripe in China Grey/Clubsport White (Silhouette scheme only). The Signature scheme (in photos here) provides both the accents and the full-body stripe finished in AMR Lime Green. Moreover, the only colour option offered in Signature scheme is Stirling Green.

The interior of the car isn’t much different from the regular car. However, it has black colour scheme with contrast finishing in either AMR Lime Green or Galena Silver. In a first for Rapide, the centre console is finished in carbon fibre. Another first for the Rapide is the Alcantara finish for its seats. There is a One-77-style steering wheel. The seats has AMR logos stitched into them (finished in Galena Silver). Lastly, there are carbon sill plaques in the car sporting AMR branding. Each car will come with a limited-edition AMR inspection plaque. Owners will be able to further personalize their cars with Q by Aston Martin. 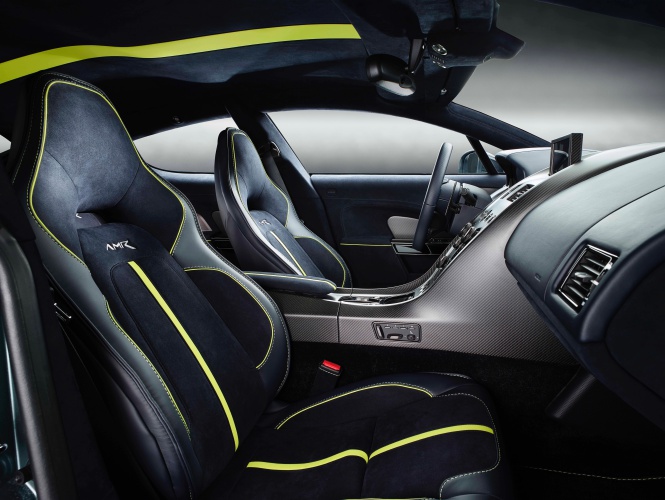 The Aston Martin Rapide AMR has an all-alloy, 48-valve, DOHC, naturally aspirated, 5.9-litre V12 engine. However, in this application, it makes 603HP power (588HP actually for buyers outside UK and EU, India included) and 630Nm torque. It gets a rear-mounted eight-speed Touchtronic III automatic gearbox which uses an alloy torque tube and carbon fibre prop shaft. The Rapide AMR can go from 0-100kmph in just 4.4 seconds and it can reach a top speed of 330kmph.

Suspension duties on the Aston Martin Rapide AMR are handled by an independent double wishbone setup at both ends with anti-roll bars, and monotube adaptive dampers (with three-stage damping) all around. The front wheels gets 400mm carbon ceramic brake discs with six-piston calipers. The rear wheels make do with 360mm carbon ceramic discs with four-piston calipers. The car measures 5,019mm in length, 2,140mm in width, 1,380mm in height, and its wheelbase spans 2,989mm. Despite the use of carbon fibre, the still weighs a portly 1990kg (4387 pounds). However, at 51:49 front:rear weight distribution, the car has almost balanced poise.

Is the Aston Martin Rapide AMR worth consideration?

Yes, it is. There are a couple of reasons for it. The first lies in the fact that it is based on the outgoing VH platform. Despite that platform’s age, it spawned some beautiful-looking cars and the Rapide AMR is one of them (well, minus the AMR treatment and suffix in the name). The VH platform cars had a lot of admirers simply for their beauty and the Rapide AMR is perhaps the last chance to bag one of those beauties.

The second reason is that Aston Martin Racing is no longer the performance arm of a cash-strapped brand. Aston Martin now has the money and AMR has the resources to do some crazy stuff. Aston Martin has developed some crazy vehicles under its Second Century plan (Vulcan and Valkyrie, anyone?) Expect the Rapide AMR to be a mind-blowing last hurrah to the Rapide four-door. Oh, there is just one more thing. Aston Martin is also working on a four-door SUV, which means the Rapide will be gone for good (at least until a future announcement). It may really be the last chance to bag an Aston Martin Rapide at all, which few will miss considering only 210 units will be made. Good luck finding one.